This year’s the 6th IBA European Corporate and Private M&A Conference was held on February 1 and 2 in Paris. The Conference was attended by over 400 international lawyers, bankers and other participants, and a number of issues were discussed in the field of Corporate and M&A. In addition, while reviewing recent trends in the field of M&A, the panel also included the basic assumptions and directions of artificial intelligence development in the field of M&A, then cyber security measures as well as the conditions and negotiation procedure itself. During the Conference, the participants were able to discuss the main challenges of the functional M&A market, as well as the key and comprehensive changes to the Basel III standards.

Due to the increasing number of companies being sold on auctions, one of the topics was M&A auctions, whose regulation is often missing in local laws, and in cases where the same exist there are noticeable differences in the legislation of different countries. It raises numerous issues such as application of laws in case of cross-border auctions, obligation of fair and equal treatment of bidders, as well as the limits of creating a competitive environment among the bidders.

In addition to auctions and taxes, there was a special discussion panel dedicated to cases in which, due to cross-border transactions, the seller insists on the M&A insurance. Participants discussed what elements should be considered on this occasion, how the same affects due diligence, whether some jurisdictions can be ignored, and how lawyers can advise their clients in relation to the M&A insurance.

Given that the development of the law and especially modern branches of law certainly affect the M&A filed, it is necessary to constantly monitor trends and harmonize regulations. Therefore, these gatherings are very useful as they deal with current issues as well as potential issues that may arise in the field of M&A.

On behalf of the Law Firm “SAJIC” the Conference was attended by Sanja Dukic and Aleksandar Sajić. 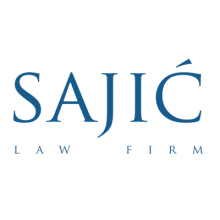 Law Firm SAJIC from Banja Luka was founded on the basis of the legal practice initiated even in 1989 by the lawyer Stojanka Sajic. It is the first law firm in Bosnia and Herzegovina founded in the form of a general partnership in 2003 by Stojanka and Aleksandar Sajic.

The firm currently has 17 employees, out of which eight lawyers, six senior associates and trainees and three administrative assistants. The main qualities of the lawyers, as well as other employees, are the client and work commitment and constant tendency to achieve the highest standards of ethics and professional excellence.

The firm, lawyers, as well as all employees are covered by professional liability insurance in case of a damage caused to third parties with the total insurance amount of 2,751,852.80 BAM.

Our strategy is focused on continuous improvement and development of our services, cooperation and preservation of good business relationships with our clients, as well as employment of quality junior staff. Excellent business relationships with our clients are primarily based on constant communication, knowledge and long-standing legal practice, and all employees are focused on achieving and maintaining high quality legal services.

As a standard of business, as of 2009, the Law Firm SAJIC established the quality and organisation management system in accordance with the ISO 9001 standards for the provision of legal services.

Louise Giannakis
On the Origin of Retail: An Evolutionary Analysis

Gianfranco Di Garbo
Italy, an Opportunity for Lawyers Working with the Public Administration in the Covid19 Era