Auxiliary Services: Essential For The Electricity Grid Of Costa Rica

The proper and safe operation of an electrical network requires not only energy, but also other elements that ensure the stability and quality of the energy provided. These types of services are known in the industry as Auxiliary Network Services, and include capabilities such as: voltage and frequency control, reactive power supply, power stabilization, cold and rolling reserve, and black start capability under cold conditions. total collapse of the National Electric System (SEN).

In Costa Rica, such services - historically - have been provided by the Instituto Costarricense de Electricidad (ICE) as part of its mandate to ensure a reliable energy supply to the country. Due to historical attitude - more than technical limitations - ICE chose not to outsource such services, but to produce them at home.

Since 2008, ICE has sought, through electricity rates set by ARESEP, compensation for the ancillary services provided, arguing that they are additional costs to those incurred to generate and supply electricity to subscribers. The position of the Regulator for a long time was that the costs of such services were already implicit in the current rates, for which the additional recognition and collection does not proceed.

Law No. 449 creating the ICE in 1949 granted it a monopoly for the sale of energy; and perhaps, due to the non-availability of third-party suppliers at that time, ICE assumed as its own obligation in addition to that of generating, transmitting and distributing the supply and supply of the ancillary services required for this.

Currently, 70 years later, profound and disruptive changes have been taking place in global electricity markets; with which, such services could well be contracted to the third best provider. In this way, both the investment and the additional risks and costs would not be the sole responsibility of said institution, but shared with those third parties.

Storage technology has made important advances.

Among the recent advances, the technology for the storage of electrical energy in particular, has shown important advances. Storage systems at different scales in other latitudes have proven to be an excellent provider of auxiliary services for electrical networks. A battery doesn't just store energy; rather, it can offer auxiliary services to the network with fast frequency response (less than 1 second) and at highly competitive prices, compared to traditional reserve resources.

In this way, great savings are made possible for system operators and, in turn, both national and cross-border electricity markets are boosted. The price of batteries has declined steadily over the past 10 years, and is expected to decline further in the short and medium term, driven primarily by the penetration of electric vehicles.

Large batteries installed by the private sector in search of energy savings are already operating in Costa Rica, and if we follow the development of the most advanced countries in this concept, soon many of us will have batteries in our homes, businesses and industries; Let's not forget that our next electric car is actually a battery with tires.

At the end of 2019, and with very good judgment in its regulatory role, ARESEP published the “Technical Regulation of Auxiliary Services in the National Electric System (AR-RT-SASEN)”, whose rate setting methodology for compensation to service providers auxiliary services, including third parties, is the only thing pending.

However, the potential providers of auxiliary services recognized as such through the AR-RT-SASEN, are the generating agents in the National Electric System (SEN) that require a concession for public electricity generation service, a situation that should be reviewed since This excludes the growing population of distributed generators that will be installing ever greater storage capacities in the medium term.

Thus, the ideal would be for the regulations to be made inclusive to recognize the subscriber-producer the auxiliary services that their batteries can offer to the national electricity grid. Thus, the consumer would make the investment for savings reasons, and the SEN would benefit from the auxiliary services that it could hire. This, in electricity markets in other latitudes, is today a reality, and it is being done with increasing frequency.

For its part, file 22009 Law for the Promotion and Regulation of Distributed Energy Resources, currently in the legislative stream, proposed by Deputies Erwen Masís and Paola Valladares dedicates a separate section to this core issue. With this, the electric subscriber will not only be able to reduce their costs by installing solar panels; rather, distributed energy storage is facilitated and encouraged. Thus contributing to the stability and reliability of the national electricity grid, as well as the use of the growing fleet of electric vehicles.

Remember that the sun does not charge us for the energy it gives us. Let us anticipate change and continue to position Costa Rica as an exemplary participant. 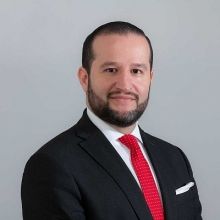 His professional practice has focused on the legal structuring of public-private participation models in Telecommunications, Infocommunications, Power Generation and Renewable Energy Projects. Also, hi has experience in Litigation in Contentious-Administrative matters, as well in multiple Administrative Proceedings before Regulatory Agencies.

In 2018 was recognized as a one of the 100 highlighting most influential in-house lawyers in Energy & TMT practice in Central America by The Legal 500 GC Powerlist: Central America 2018. Also, in 2019 he was included as a LACCA Member.