Toys “R” Us filed for bankruptcy in September 2017, with hopes that a strong holiday season would facilitate a successful reorganization. After holiday sales proved to be far less lucrative than the company and its professionals had hoped, the announcement was recently made that the company would commence store closing sales at all 735 of its U.S. stores. What this means for the many landlords affected by the Toys “R” Us bankruptcy filing is that a probable anchor tenant in their center is at imminent risk of going dark, which may trigger co-tenancy requirements. However, Toys “R” Us is also pursuing the sale at auction of certain of the commercial leases in the company’s portfolio.

A bankruptcy lease auction process enables a prospective purchaser to pay to take assignment of a lease without having to obtain landlord consent (though such a purchaser would have to adequately show that, at a minimum, it will be able to perform the obligations of tenant under such a lease). Given the tenant-friendly terms of many anchor leases, which are oftentimes on the tenant’s lease form, an anchor tenant lease sale may be the perfect scenario for an opportunistic retailer looking to quickly expand its physical presence in the marketplace (Amazon.com being one retailer that has been rumored to be interested in certain Toys “R” Us leases).

At risk in this process are the landlords who may be forced to live with a tenant for whom they did not bargain (under lease terms that may not have been offered to such a tenant) for, possibly, many years to come. If the lease is for space within a “shopping center” within the meaning of the Bankruptcy Code, a landlord may take some comfort that the Bankruptcy Court should not approve the sale of its lease if, in doing so, the exclusive use restriction of other of its tenants would be violated, the use is not permitted by the use clause in the Toys “R” Us lease or if the tenant mix of the center will be disrupted. However, these protections may not be supported by the lease language and, regardless, seeking the mercy of a court is never a sure path to victory. So what is a more viable option for a landlord focused on retaining retain control over its center? Bidding for the termination of its own lease at auction.

Last week, the Bankruptcy Court approved bidding procedures for the sale of as many as 157 of the Toys “R” Us debtors’ commercial leases and the auction is scheduled to take place tomorrow. Landlords were authorized to submit a bid (the deadline was Monday) to terminate their own lease(s) by “credit bidding” the amount of existing arrearages, which is effectively a claim waiver. If there is a competitive bidding process for a lease, a landlord may ultimately have to include a cash component as part of its bid, but a credit bid alone may be sufficient to secure the landlord a seat at the auction table, which is the best way to monitor the process to see who is out there bidding for a lease and what consideration is being offered. Landlords should be cognizant of the fact that there may be a bidder at auction who is prepared to offer a bid for a package of leases, which may be too valuable for the estate to break up for the sake of doing a one-off transaction with a landlord. And, of course, there may be a bidder who is simply willing to pay more for a lease than is a landlord. That said, if a landlord is worried about the fate of a lease, particularly that of an anchor tenant such as Toys “R” Us, the best first line of defense is for such landlord to submit a bid so that it has the opportunity to be the successful bidder for its own lease at auction. 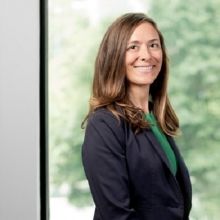 Vanessa also represents debtors, creditors' committees, trustees, tenants and landlords, lenders and other creditors in connection with bankruptcy cases, including bankruptcy-related litigation, and in out-of-court workouts. Vanessa's practice has also involved the representation of lenders in leveraged buy-outs, secured financings and other debt transactions.

Retail development is the center of Nancy Davids' real estate practice. Nancy represents retail landlords and tenants in enclosed mall, lifestyle and mixed use projects. She also represents developers of office and retail projects in connection with zoning and land use issues. Nancy is a Director and the Co-Chair of the Goulston & Storrs Retail, Restaurant & Consumer industry group.