Copyright for AI-generated Works - The "Machine" as Creator?

"Computers are absolutely useless. They can only give you answers." - Pablo Picasso, 1946.

When we try to approach the question as to whether artificial intelligence works are to be given copyright protection, this statement of Picasso is interesting from two points of view: Firstly, when this statement is put in the context of technical progress, we find that computers have long since ceased to provide only answers. Secondly, Picasso's statement can also be understood to mean that, in his view, computers can in no way make a stimulating or ingenious contribution to culture; this begs the question as to whether the legislator should have any interest at all in granting protection to AI-generated works.

It should be noted that, already in 1946, Picasso's view that computers are useless was hardly based on fact, in the light of early exemplars such as the Colossus or the so-called Turing machine of the computer scientist Alan Turing. After all, both computers were able to decipher messages encrypted by the Lorenz cipher machine and the Enigma during the Second World War and may have played a significant role in the victory of the Allied forces.

In any case, this view is clearly outdated today. The computers of our time no longer "only" give answers. They are no longer just a tool that executes rules programmed by human beings based solely on the principle "If x, then y". Rather, computers today can teach themselves new rules and fields of application through so-called machine-learning, which cannot always be foreseen by the programmer; this is why we speak of so-called "artificial intelligence" or the "black box". A computer is no longer just the "brush" of the artist; it itself is doing the artist's "brushwork".

Using this artificial intelligence, a number of more or less well known and remarkable achievements have already been made in the recent past.

Thus, a collective under the name "Obvious" created the painting "Edmond de Belamy" (https://en.wikipedia.org/wiki/Edmond_de_Belamy) by means of artificial intelligence, which was auctioned in October 2018 by the well-known auction house Christie's for 432,500 US dollars.

On 21 March 2019, the internet search engine Google was able to use artificial intelligence in honour of Johann Sebastian Bach, which created a composition in the style of Bach from a sequence of notes entered (https://www.google.com/doodles/celebrating-johann-sebastian-bach). As early as mid-2016, a song composed by artificial intelligence in the style of the Beatles was published on YouTube (https://www.youtube.com/watch?v=LSHZ_b05W7o).

The achievement that attracted the most attention was the painting "The Next Rembrandt", created by artificial intelligence and published on 5 April 2016, 347 years after the painter's death. It shows a gentleman between 30 and 40 years of age with beard, hat and collar, looking to the right. To create the painting, the artificial intelligence identified details and characteristics of all 346 known original paintings of Rembrandt (https://www.nextrembrandt.com).

These achievements in the recent past only give a foretaste of what could be possible in the coming years and decades through the use of artificial intelligence.

In German law, a work needs to be a personal intellectual creation in order to be granted copyright protection. Copyright protection only arises when a human activity achieves a certain degree of creativity or, in other words, achieves the required level of originality.

As long as humans use the computer as a mere technical tool or aid, a sufficient human contribution is present, which can lead to copyright protection. There is therefore no legal uncertainty if a photographer using a digital camera decides which object or person he wants to photograph at which angle, from which distance and with which settings.

This becomes more difficult where the parameters for defining the creative act can no longer be clearly assigned to a person or to artificial intelligence. This could be the case, for example, when a person only sets the rough specifications for a work to be created, which the AI uses to develop more and more steps of the process, so that the work ultimately presents itself as created by artificial intelligence. The more the AI takes over the direction, the more the human being steps into the background; this can escalate up to the point that a sufficient human contribution is missing, with the legal consequence that copyright protection is excluded according to the current legal situation.

To reach a decision on borderline cases on the basis of the current legal situation, the delimitation criteria listed below could be useful.

When an idea is developed by AI or software, the later programming as well as the collection and input of data are considered purely preparatory actions, which may be taken as an indication of the extent to which the later AI-generated work is a creation of the programmer. However, such preparatory acts are not sufficient to benefit from the protection of copyright for the work result itself. The protection of copyright always relates only to the concrete result, the work itself, and not the steps needed to achieve it.

Irrespective of this, on the way to the later work result, preparatory actions may nevertheless be necessary, in which copyrights are independently created. Under existing German law, the programmed AI itself should be protected as a computer program.

In order to assess whether there is still sufficient human contribution, one should determine who was responsible for managing and controlling the creative process. This criterion can also be simply expressed with the question: Who was the brush and who guided the brush? The person or entity which controls the creative process largely determines the later result, the work itself. If the programmer of the AI has made such strict specifications, that the result of the AI output is already clearly predictable at the beginning of the creative process, then the programmer will still have guided the brush (the software here) with the consequence that the programmer is recognised as the author with all property rights.

If, however, the programmer has only made general specifications and left the concrete design or even type of work result to the artificial intelligence, then the result is largely based on the designs and implementations of the AI. In this case, a personal intellectual creation of a human being is missing. The AI would have 'held the brush' and would have to be regarded as the creative artist, with the consequence that under current German law there would in principle be no copyright for the resulting work.

As last criterion, one could ask who is ultimately responsible for selecting the work. If the AI has provided several works or partial works and it is left to the programmer to combine them into a complete work or to select the best result, this does not constitute a sufficient service for obtaining copyright protection. In order to assess the origin of copyright protection and the question of ownership, the creative process itself must be taken into account. However, this is already completed at the time of selection. The concrete results have been achieved and remain so. The programmer or the AI can only make a selection according to certain rules, e.g. for an exhibition. However, according to the current German legal situation, this act of selection is not sufficient to establish an author of the finished, existing work results.

However, the selection, compilation and preparation of partial works could be a work protected by copyright independently. In Germany, for example, protection as a so-called collective work or as a database work could be considered.

The current legal situation only offers copyright protection for AI-generated works to the programmer if he has exercised a decisive human influence on the AI during the creative process.

However, rapid technological progress and the digitalisation of our working and living environment lead to the assumption that AI-generated works will not only increase, but also that the influence of humans on the creative process of a work, as required by the current legal situation, will diminish more and more.

For the (European) legislator, the question therefore arises as to the worth of the human author, especially in cultural terms. To go back to Picasso: legislators must ask themselves whether they consider AI works to be culturally lifeless and less worthy of protection, or whether they can be commercialised as a valuable product and are therefore worthy of protection.

In my view, it is desirable that the legislator always links the protection of copyright to sufficient human influence so that cultural producers and their works are not reduced to potential commercialisation. AI undoubtedly offers the possibility to shorten and standardise – and probably also make more economical – the creation process for works. However, in most cases this is inevitably accompanied by a loss of identity, individuality, creativity and other cultural values.

The legislator should take this into account in the question of whether a separate property right for AI-generated works will be required in the future. 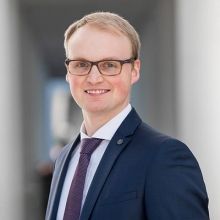 Heiko Luers has broad expertise in Internet and IT-law in particular in data protection law. In addition to drafting data processing agreements, records of processing activities and data protection policies as well as guidelines for companies, his field of consultancy also includes communication with supervisory authorities in cases of data protection violations and fine proceedings.

In addition, he advises and represents companies and private individuals in civil law proceedings with a focus on commercial law.

Heiko Luers also advises on intellectual property matters, such as unfair advertising. A further focus of his practice is the representation of professionals in liability proceedings.

He also advises and represents companies and private individuals in civil law proceedings with a focus on commercial law.

Heiko Luers also advises in matters of intellectual property rights as well as media law and the right of free speech, for example in cases of violation of the right of personality.