The New York Convention on the Recognition and Enforcement of Foreign Arbitral Awards is one of the most important and successful United Nations treaties in the area of international trade law. Costa Rica signed the New York Convention, with no reservations under Art.I(3), on December 2nd, 1977 (Source Law No. 6157). The guide intents to explain the application of the NYC in the Costa Rican Judiciary. [1]

B.- National sources of law

The sources of law applicable to recognition and enforcement of foreign awards in Costa Rica are the following:

Costa Rica has no specific legal provision for time limit applicable to the commencement of legal proceedings for recognition and enforcement of foreign awards.

The Civil Code of Costa Rica contains a chapter devoted to Rules on Private International Law, article 26 of which states: “The statute of limitations and all that pertains to the manner of fulfilling or extinguishing the obligations resulting from any legal act or contract to be executed in Costa Rica shall be governed by Costa Rican laws, even if the grantors are foreigners, and although the act or contract has not been executed or celebrated in the Republic”.  (Source: Law No. 9342, art. 26)

For any international commercial award, the applicable law will be the Code of Commerce, which has a statute of limitations of four years. (Source: Law 3284, art. 984)

The time limit is four years from the date on which the foreign award is enforceable or became final under the law of the country where it was made. (Source: Law No. 3284, art. 874)

The First Chamber of the Supreme Court of Justice of Costa Rica is the court with jurisdiction over the recognition of foreign awards. Once the award is recognized in Costa Rica, the competent authority to enforce the award will be the Civil Judge of the place of the domicile of the party against which enforcement is sought; if that party is domiciled outside Costa Rica, the competent Civil Judge will be the one of the place chosen by the applicant. (Source: Law No. 9342, art. 99.3 / Law No. 8, art. 54)

The Costa Rican court has international jurisdiction when

The first decision granting or denying recognition and enforcement is obtained through an inter partes process, and the party against which enforcement is sought will be notified by the court or by the requesting party. Once the award has been recognized, the First Chamber will send the case for enforcement of the award to the Civil Judge, where the inter partes process continues. (Source: Law No. 9342, articles 99.3 and 114.2)

The decision of the First Chamber of the Supreme Court of Justice, granting or denying recognition and enforcement is not subject to recourse, and enforcement may not be suspended. (Source: Law No. 9342, art. 99.3)

If the recognition is denied, documents will be returned to the applicant. If recognition is rejected due to inaccurate formalities (such as not presenting an authentic copy of the award or translation thereof, lack of payment of the legal stamps to initiate the procedure, etc.), the applicant may file a new application once the formality at issue has been corrected. (Source: Law No. 9342, art. 99.3).

Once recognition has been granted by the First Chamber of the Supreme Court of Justice of Costa Rica, the party seeking enforcement of the award may request interim or protective measures from the Civil Judge assigned with the award’s enforcement, such as freezing of assets, annotations on public registries, etc.. That judge will command all measures directed at the protection of assets to fulfill the order in the award. In the event of an appeal against any such interim or protective measure, the decision granting or revoking the interim measures will not be suspended. In any event, possession of assets may only occur after the conclusion of the proceedings before the Civil Judge. (Source: Law No. 9342, articles 77, 78 and 86.2).

For the recognition and enforcement of foreign awards, the applicant must submit to the Court:

The diplomatic or consular requirements are the authentication of the signatures or the apostille certification. (Source: Law No. 9342, art. 24.2 and 99.2)

It is necessary to provide a full translation of all documents submitted in another language than Spanish. (Source: Law No. 9342, art. 24.2).

Translations should be done by an official translator authorized by the Ministry of Foreign Affairs of Costa Rica. If a translator does the translation in another country than Costa Rica, the document will need to be certified by a diplomatic or consular agent of Costa Rica or bear an apostille. It is therefore recommended to do the translation in Costa Rica. (Source: Decree No. 23198-RE, art.1, and Decree No. 25683-RE, art. 6, both of the Ministry of Foreign Affairs regarding official translators and interpreters).

The court in Costa Rica may deny recognition and enforcement of the award when it is not yet binding or has been set aside or suspended by a court of the country in which, or under the law of which, that award was rendered. In such case, the court may stay its decision and proceedings, if it considers appropriate, and it may also order the other party to give appropriate guarantees upon request of the party requesting the recognition or enforcement of the award. (Source: Law. No. 8937, articles 36.1.a.v) and 36.2; NYC, art. V(1)(e))

The authority or court may stay legal proceedings for recognition and enforcement (e.g., forum non-conveniens) when the award is not yet binding or has been set aside or suspended by the court of the country in which, or under the law of which, that award has been rendered.

The granting of a stay is not conditional on the provision of security, but, at the request of the applicant, the court may order the other side to give appropriate guarantees.

Nonetheless, article 2.10 of the Costa Rican Code of civil procedure imposes that hearings be public. However, the following exceptions apply:

Any party may also request and obtain the protection of confidential information.

Costa Rican law does not refer to, or make use of the terms “interim” or “partial” awards, and only addresses awards and interim measures.

According to articles 98 to 100 of the Costa Rica Code of civil procedure, Costa Rica is open to accept international awards, interim measures, and any other type of assistance required by an arbitral tribunal.

Regarding recognition and enforcement of interim measures:

The records of the First Chamber of the Supreme Court show that Costa Rica has not yet decided upon a request to recognize and enforce an interim measure rendered by an arbitral tribunal.

Parties may request recognition and enforcement of non-monetary reliefs in foreign arbitral awards.

Set aside awards by the competent authority referred to in Art. V(1)(e) of the NYC

The court in Costa Rica may deny recognition and enforcement when the award has been set aside or suspended by a court of the country in which, or under whose law, that award has been rendered. (Source: Law. No. 8937, art. 36.1.a.v)

There is currently no case law on the issue of enforcement in Costa Rica of an award that would have been set aside at the place of arbitration. 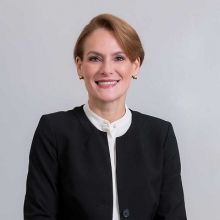 Mrs. Hulbert has 25 years of professional practice in commercial dispute resolution. She is the founding partner and director of Hulbert Volio Montero Law Firm; with vast experience on national and international law, with special emphasis on complex cases.

Luisa María Castro
Are There Alternative Ways To Save The Company Instead Of Bankruptcy?

Gilberto Gelosa
Pragma Business Congress in Boston (USA): Join Us to Develop Your Business in the States, Meet Industry Leaders and Professionals and Share Knowledge and Insights