Home » Articles » Maria Evangelou » How Crucial Is Nowadays the Role of Risk and Compliance Officers?

How Crucial Is Nowadays the Role of Risk and Compliance Officers?

We have recently noticed the significant changes with regards to the sanctioned entities and jurisdictions announced from the President of the United States of America, the regime changes in Iran, restrictions or even exclusions of collaborations with Politically Exposed Persons, and the list of such restrictions is getting longer day by day. Overall, is there any definition for a “safe” co-operation which companies can follow to protect themselves? Is there any available list of “blacklisted” entities (being either legal or physical) with whom any provision or receipt of services and/or goods is prohibited? And the most important, where such information can be retrieved to make the decision-making process easier for compliance officers before any cooperation is concluded?

These are some of the numerous unanswered questions that are, however, of utmost importance to the protection and sustainability of any organization.

It is a fact that global sanction lists are continuously increased, affecting thus the rules for co-operation with some states that are now considered to be of high risk. It is worth noting that the term “states” in that case, is not restricted to nations or jurisdictions, but refers also to physical and legal entities, for various reasons.

It would be fair to say that the use of digital technology has greatly improved the research process in general and even more when referring to the procedure of getting information on all the aforementioned. In particular, research process has now become significantly efficient through the use of global news sites that are updated on real-time, as well as the ability of reviewing up-to-date announcements; fines and remarks; amongst others, from the regulatory authorities; ministerial offices; central banks; and so on.

Although the digital technology has been beneficial in many ways when it comes to the ability of retrieving any information through the global sources, there is however the opposite side which should also be taken into account so as to evaluate whether any information is considered free or biased. The right to freedom of opinion, enables everyone to express their own views, thus transforming the global network into a forum of public debate and multiple opinions. Consequently, even-though such search engines make the research process much easier and efficient, it is highly crucial whether all those opinions, articles, or announcements are reliable.

With the ever-increasing compliance requirements from the regulatory authorities with regards to the risk; compliance and monitoring procedures, either of the current or the prospective clientele of each organization, almost (if not) all legal entities are, by law, obliged to monitor their clients in order to combat money laundering and terrorism financing activities [see relevant European and International Directives].

Importance of KYC and the role of Compliance Officers

Can Money Laundering be prevented?

Although money laundering is generally considered as a fraudulent activity that is performed intentionally, can somehow be prevented given that all necessary actions are carried out. Such actions include Client Due Diligence and the well-known KYC process.

Know Your Customer (KYC) was initially a mandatory process for all banks to prevent money laundering, terrorist financing, manage risks and financial frauds. KYC regulations are, however, increasingly becoming critical issues for just about any institution that touches money. Thus, whilst banks are required to comply with KYC to limit fraud, they also pass down that requirement to those with whom they do business not only the bank itself.

It is generally acceptable that compliance officers’ role is one of the most crucial roles amongst all employees within a firm as the risk and particularly reputational risk, is on their hands. So, in order to reduce such risks, Due Diligence and KYC screening should always be performed. This is also the point of whether, and if so, from where compliance officers can find reliable and unbiased information not only for the screening and due diligence procedures but also for monitoring purposes, that is definitely not an easy job!

Amongst other responsibilities, compliance officers are required to investigate each and every client, including both individuals and companies and to ensure that the subject entity was not involved in Money Laundering, Terrorist Financing or any other related offences, keeping in place all the required evidence.

Numerous cases were identified recently referring to money laundering scandals. Except of the monetary fines, such events led to a significant adverse impact on each entity’s reputation. From the most recent scandal of Danske Bank in 2018, bank’s share price dropped by 11% with a dramatic fall of 40% drop of entity’s market value.

Another popular event is the one of Commonwealth Bank, in which case share dropped by around 4%. Similarly, Raiffeisen Bank International AG’s fine for money laundering activities led to a sharp drop equal to 11% of bank’s stock price.

These are only some of the numerous recent examples of money laundering scandals in the European Union market, showing the respective impact such events had on each organization’s reputation and market value.

Consequently, reputational risk is of utmost importance and the need to get to know your clients is a significantly important aspect and the necessary actions should be in place by each organization, being regulated or not. 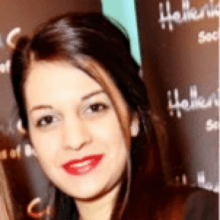 Maria Evangelou received her education at Birmingham City University in Birmingham, United Kingdom, where she received a BA (Hons) in Accounting and Finance and later completed her Master Degree in Financial Management at the University of Edinburgh in Edinburgh, Scotland.

Her professional career started in 2014 as an Associate in the Audit and Assurance services department at PricewaterhouseCoopers Ltd. In 2017, she joined the Infocredit Group as a Business Advisory Consultant and in March 2017 joined The CORPRO Ltd as a Corporate Services Manager.

Maria is also member of the Association of Chartered Certified Accountants and the Institute of Certified Public Accountants of Cyprus.

Eileen Pembridge
Where Are We Now on Divorce?

Raul de Cruïlles
Is It Lawful to Sell a Product Below Its Cost?