In addition to representations and warranties, M&A purchase agreements generally include indemnification provisions, pursuant to which any given party (indemnitor) agrees to defend, hold harmless, and indemnify the other party or parties (indemnitees) from specified claims or damages. These typically include claims arising from a breach of the indemnitor’s representations and warranties or covenants set forth in the purchase agreement, or with respect to other specific matters.

A typical indemnification provision in an M&A purchase agreement may read as follows:

Indemnification by the Seller. The Seller agrees to and will defend and indemnify the Buyer Parties and save and hold each of them harmless against, and pay on behalf of or reimburse such Buyer Parties for, any Losses which any such Buyer Party may suffer, sustain or become subject to, as a result of, in connection with, relating or incidental to or arising from:

An indemnity basket and cap may be reflected in language such as the following:

provided that the Seller will not have any liability under clause (i) above:

(i) unless the aggregate of all Losses relating thereto for which the Seller would, but for this clause , cumulatively be liable exceeds on a cumulative basis an amount equal to $X (the “Basket”), with the Purchaser remaining liable for such original Basket amount of $X; and

(ii) to the extent that the aggregate of all Losses for which the Seller would, but for this clause , be liable exceeds on a cumulative basis an amount equal to $Y (the “Cap”);

The Parties’ Positions on Indemnity Caps

Because the representations and warranties of the target company, or selling stockholders, as applicable, are likely to be much more extensive than the typically limited representations and warranties of the buyer, the buyer is more likely than the seller to be the indemnitee and beneficiary of indemnity, and thus has an interest in keeping any limitations on indemnity to a minimum. The seller or indemnitor, of course, has the opposite interest: to limit the circumstances in which it will have indemnity liability to the buyer or any other indemnitee.

An indemnity cap is one typical limitation on indemnity liability in private company M&A transactions. While a cap is commonplace in M&A agreements, so are exceptions to the cap. The most common exceptions to an indemnity cap relate to the indemnitor’s breaches of its most critical, or fundamental representations or of its covenants or agreements. The former exception recognizes that as to those subject areas which are critical to the overall risk allocation between the buyer and seller, the seller or indemnitor should stand behind its representations and warranties without limitation.

The best example relates to title to the assets or equity being acquired. A buyer will argue, not unreasonably, that if the seller’s representations as to ownership of the assets or equity being acquired are untrue, the seller should have full liability for any damages the buyer incurs due to defects in title. The latter exception, as to covenants, is based on the understanding that whether or not a party’s covenants are breached is fully within the control of that party. Thus, the breaching party should not be permitted to use the indemnity cap as a shield but, instead, should be required to perform its obligations as stipulated in the agreement.

One common example is the seller’s non-competition covenants, whereby the seller agrees not to compete, following the closing, with the business being sold. From the buyer’s perspective, the seller should be forced to comply with its agreement not to compete, and should not have an option to compete liability free above an indemnity cap.

Every other year since 2005 the ABA has released its Private Target Mergers and Acquisitions Deal Points Studies (ABA studies). The ABA studies examine purchase agreements of publicly available transactions involving private companies. These transactions range in size but are generally considered as within the “middle market” for M&A transactions; the median transaction value within the 2019 study was $145 million.

Over the nine ABA studies (2005-2021), indemnity caps have declined as a percentage of transaction value, whether as mean or median. This decline has been fairly consistent over the period of the ABA studies despite an uptick in the mean of indemnity caps following the financial recession of 2008 that was almost certainly the result of the private company M&A market being intensely “buyer friendly” during this time period.

For reference, the mean represents the average of all of the covered data, and the median represents the data point separating the lower and higher halves of the overall data. Median is often considered a more reliable indicator of what is normal or typical where data distribution is skewed.

The chart below shows the downward trend in indemnity cap amounts as a percentage of transaction values. 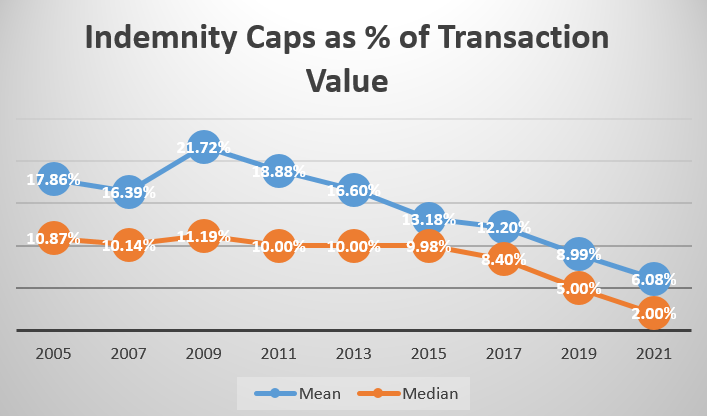 The Role of Representation and Warranty Insurance (RWI) in Indemnity Caps

One of the biggest changes in private company M&A during the past decade has been the growth in the use of RWI. With RWI, buyers and sellers are able to allocate some of the post-closing M&A indemnity risk to third party insurers. RWI has gone from being a differentiator that aggressive buyers offered to a much more common feature of private M&A deals. As indemnity risk has been shifted through RWI from sellers to third party insurers, avenues for a buyer’s indemnity recourse against sellers have narrowed. This narrowing includes the lowering of indemnity caps and even the elimination of post-closing seller indemnity for representations and warranties, subject to narrow exceptions, such as in the event of fraud.

The ABA Study in 2017 was the first to review the use of RWI in private M&A transactions, and to consider the relationship between indemnity caps and deals that referenced RWI in the transaction documents.

It is worth noting that relying on references to RWI in M&A transaction documents as evidence of RWI’s usage is potentially imperfect, because RWI is not necessarily mentioned in a purchase agreement even if procured for that transaction. It is possible that some meaningful number of M&A deals with RWI have no references in the deal documents to the insurance policy itself.

As shown in the chart below, the 2017, 2019, and 2021 ABA studies each showed that indemnity caps were lower in reported deals where RWI was referenced in the deal documents, as compared with transactions without any such reference. 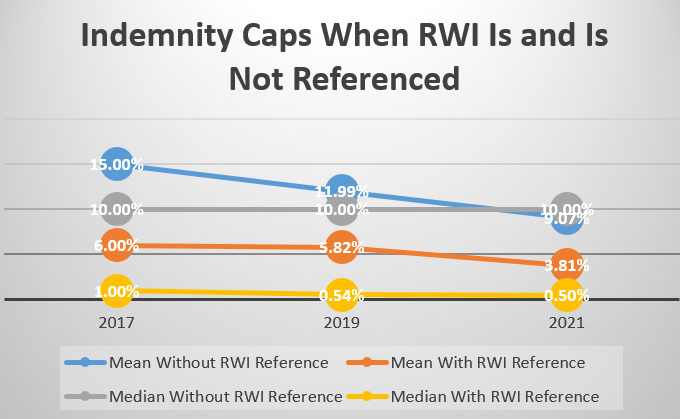 Indemnity caps are often one of the most intensely negotiated provisions of an M&A purchase agreement. The market amount for indemnity caps has historically been a direct reflection of the relative strength of buyers and sellers in the private company M&A market. Most recently, however, the growth of RWI has had a dramatic impact in lowering indemnity caps, and this trend is expected to continue and stabilize.

Reproduced with permission from Bloomberg Law. Copyright ©️2022 by The Bureau of National Affairs, Inc. (800-372-1033) http://www.bloomberglaw.com 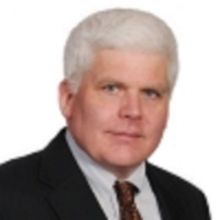 Public and privately-held international and domestic companies with cross-border and multi-country M&A transactions turn to Dan Avery, a Director, for legal representation. Dan is a member of the ABA’s committee that publishes private company M&A deal point studies and of the M&A Advisory Board for the Bloomberg M&A Law Reporter. Dan has been involved in the acquisitions or dispositions of more than 80 different businesses located throughout the U.S., Europe and Asia for domestic and international corporate buyers and sellers. Dan also represents companies involved in the retail, entertainment, music and sports industries.

Miguel Galán
Should I File For Bankruptcy After COVID-19?

Marcela Afanador L.
Brake to the Evasion of Taxes in the Purchase or Sale of Real Estate in Colombia