The Importance of the BiH Pledge Registry

In Bosnia and Herzegovina, the Framework Law on Pledges, on the basis of which the so-called registered pledge was established, has existed since 2004. The adoption of this law is the result of the process of rationalization and modernization of the institute of the pledge, with an aim to improve the economic environment and enable participants in commercial transactions to access more easily the financial resources needed to perform activities on the market. The Pledge Registry was established for the purpose of registration and obtaining information on pledges and the same is established in accordance with the Framework Law. The Pledge Registry is maintained by the Ministry of Justice of BiH. In addition, the Rulebook on Pledges of BiH was adopted in order to regulate the work of the Pledge Registry and issues related to the enforcement procedure on the basis of the Framework Law.

The primary advantages of introducing registered pledge into the legal system of Bosnia and Herzegovina are reflected in the facilitation of business for economic entities, which based on pledging movable property without losing the right to possession can in easier, faster and simpler manner through loans acquire funds needed for business ventures and investments. From the legal aspect, the registration of the pledge affirms the principle of publicity of the pledge right through entry in public books, which contain data on registration and the subject of the pledge, then details about the pledgor and the pledgee, etc. In other words, publicity in the pledge of movables under the Framework Law is not ensured by simple handing over the goods to the pledgee. In fact this leaves the possibility of pledging movables without preventing the pledgor from further business operation with pledged items (eg the company pledges equipment or machinery as collateral related to the loan agreement, where it can continue to use the same equipment for further business and gaining profits). In this manner, the registered pledge, in relation to the traditional pledge, leaves the possibility for the business entity to use the pledged items for the purpose of performing business activity and  repay the debt for which the pledge right has been established.

The Framework Law also regulates certain issues of enforcement proceedings as a lex specialis in relation to the entity laws on enforcement proceedings. The specifics of enforcement based on the provisions of the Framework Law are relatively broader powers of the bailiff, who will in any case confiscate the collateral, and depending on the pledgee’s proposal, will sell it or hand over to the pledgee for sale. In order to acquire possession on the collateral, the bailiff is authorized to enter any space (closed or open). In case of breach of the obligation from the pledge agreement by the pledgor, the pledgee may take collateral personally and without the assistance of the bailiff, but only after the pledgor has provided written consent. These provisions are in line with the requirements for more efficient and urgent enforcement in the event of a breach of the obligation under the pledge agreement. In this sense, the Framework Law deviates from the principle of formality of the pledge right, in two directions. In the first place, a deviation is possible in the phase of taking away the collateral, if the pledgor agrees to do so in writing. If the pledgee does not express his/her written consent, there is no way to take the collateral through an out of court procedure. Second, deviation from the principle of formality is also possible in the phase of selling the collateral, in which case in accordance with the law the sale is being transferred into the hands of the pledgee if the same proposes so. In that case, the pledgor’s consent to such type of collateral sale is not required.

However, the biggest complaint addressed to the Framework Law is definitely the insufficient harmonization with the domestic legal order in the nomotechnical sense. The uncritical reception of the Anglo-Saxon structure and terminology applied in the provisions of the Framework Law are justifiably the subject of scientific and professional criticism. Therefore, there are often problems in practice with the application and interpretation of certain institutes of the Framework Law, and it further causes complications and increases the cost of its application. The law implements certain terms like “special property right” for the rights of the lessee under the long-term lease contract or the rights of the client under the commission contract, which is unacceptable from the point of view of the European continental legal tradition, because it is understandable that it is not a property right. Therefore, in the forthcoming period, the legislator should base amendments on the harmonization of certain institutes and provisions of the Framework Law with the domestic legal tradition, in order to further affirm the importance of the pledge registration in Bosnia and Herzegovina.

Another objection that could be addressed to the Framework Law is the procedural burdens for the pledgee in terms of delivering timely notifications to the pledgor and other persons who have some right to the subject of the pledge. In this sense, the role of the court is completely reduced, and the pledgee is typically the one who should provide the necessary information to involved parties about the actions taken during the proceedings. Regardless of the tendency to diminish the importance of the principle of formality, we believe this nevertheless imposes a disproportionate burden on the pledgee, and that the court should retain the role of the spiritus movensa of the enforcement procedure in this regard. 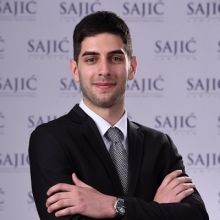 Igor Letica is a Junior Associate employed by the Law Firm SAJIC since 2018. Igor graduated from the University of Banja Luka School of Law in 2017.

Lennard Govers
How to Get Divorced in The Netherlands