Declaring a state of emergency or a natural or other disaster caused by a virus coronary pandemic, BiH citizens are faced with numerous dilemmas and questions regarding things that they have not only planned before and during the time of the event, but which have yet to occur after the danger of infection stop.

One such question that begs everyone and whose biggest cause is fear is whether many who have already paid the travel arrangements will have to cancel the trip and what are the rules of travel agencies in these situations, ie. if a tour is canceled due to fear of coronavirus, is it refunded in whole or in part?

At the level of BiH (and neither the European Union), there are still no clear patterns and procedures of state institutions regarding travel to endangered areas, except that certain border crossings of BiH are closed, flights canceled and there is currently no ban on travel to any endangered destination except obvious recommendations to reduce movement and not travel.

Decisions and recommendations do not exist for travel agencies to act on their own cancellation of travel arrangements and travel.

According to the Law on Obligations (Article 878), the tour operator may cancel the contract in whole or in part, without the obligation to compensate for damage if, before or during the performance of the contract, exceptional circumstances occurred that could not have been foreseen, avoided or eliminated.

These extraordinary circumstances certainly include the COVID-19 virus pandemic, which has declared a state of emergency in the desired destination. In the event of such cancellation of the contract prior to its execution, the organizer must, as a whole, return what it has received from the passengers.

Acting on the aforementioned Law, agencies in BiH have already canceled most of the planned arrangements in areas where the coronavirus epidemic is the focus, but the question remains what will happen in cases where the agency did not cancel the arrangement and the traveler (for fear of coronavirus) wants to cancel trips.

Under section 877 of the Law on Obligations, a passenger may at any time withdraw from the contract, in whole or in part.

If the traveler terminates the contract within a reasonable time, which is determined by the type of arrangement (timely cancellation), before the start of the trip, the tour operator is entitled only to the administrative costs.

In the event of untimely cancellation of the contract, the tour operator may require the traveler to pay a certain percentage of the contracted price, which is determined in proportion to the time remaining until the start of the trip and which must be economically justified.

The tour operator is only entitled to reimbursement of the costs incurred if the traveler canceled the contract due to circumstances which he could not avoid or eliminate and which, if they existed at the time of the conclusion of the contract, would constitute a justifiable reason not to conclude the contract, such as a coronavirus pandemic.

RS Law on Consumer Protection (Article 92) has regulated this issue in more detail, and it is stipulated that if the consumer, before commencing the trip, withdraws from the package tour agreement within a reasonable period, which is determined by the type of travel in general travel conditions of the agency, the agency is entitled to reimbursement of administrative costs, which may not exceed 5 percent of the value of the arrangement.

In the event of untimely cancellation of a package deal, the agency may require the consumer to pay compensation in a certain percentage of the agreed price, and the percentage shall be set in proportion to the period remaining until the journey begins and which must be economically justified.

If the consumer withdraws from the package deal due to circumstances that he could not avoid or eliminate and which existed at the time of the conclusion of the package deal would be a justified reason not to conclude the contract (COVID-19 virus pandemic), as in the case If the consumer provides a suitable replacement or replacement found by the agency, the agency is entitled exclusively to reimbursement of administrative costs.

According to the Law on Tourism of RS (Article 26), travel agencies are obliged to have the General Conditions of Travel in which the above legal solutions have been implemented, so they must also contain a part related to the agency's right to reimbursement of costs incurred if the user of the tourist service has given up of the contract due to circumstances which he could not have avoided or eliminated and which would have existed at the time of the conclusion of the contract would be a justifiable reason not to conclude the contract.

In the situation where the traveler cancels the contract due to circumstances that he could have foreseen or eliminated (unjustified reason), it is known exactly how many percent of the money paid to the client can remain, depending on which time from the day of departure he can leave. So for example. in the General Conditions of Travel may be:

Among other things, it may even be stated that local terrorist attacks, explosions, infections, epidemics and other diseases, natural disasters, climatic conditions for which no state of emergency has been declared by the competent authorities of the country of origin or country of travel are not justified reasons for canceling or stopping the trip. .

All of the undesired travel cancellation costs mentioned above can be avoided by paying for cancellation insurance.

The cost of an insurance policy is approximately five percent of the value of the arrangement, but the insurance covers only the cases explicitly stated in the policy. 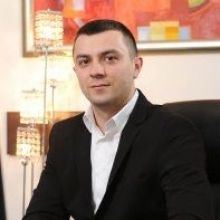 Zeljko Vlacic is a Senior Associate employed by the in the Law Firm SAJIC since 2011. Zeljko graduated from the University of Banja Luka School of Law in 2011.

Zeljko is an authorized patent attorney, registered at the Institute of Intellectual Property of Bosnia and Herzegovina.

In addition to intellectual property, Zeljko's area of expertise is also bankruptcy and liquidation, sports law, issues related to the associations of citizens, concessions especially in relation to mining, real estate, family law and inheritance, as well as issue of the metallurgy and metal and textile industry.

David J. Rabinowitz
When in Rome: Our Take on the ICSC OAC (Open Air Summit)