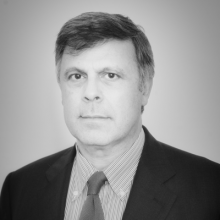 He graduated in Law from Turin University in 1982 with a thesis in Commercial Law, and in the years that followed he gained significant experience as head of the in-house legal department of an important listed company.

He directs and coordinates all the firm’s activities; this includes providing consultancy and assistance in the commercial, company, financial and corporate restructuring fields.

He has been appointed as arbitrator or defence lawyer in a number of arbitration proceedings.

As a result of his experience in the field of bankruptcy proceedings, several courts have appointed him as administrator in arrangements with creditors, and he has been appointed as legal advisor by both the regulator and by businesses in the context of insolvency proceedings.

He serves as a Director of companies operating in the field of asset management and the supply of credit. He is a member of the supervision body of healthcare and environmental companies. He is also policy director of an important banking foundation.

He established and is the current chairman of the RES Business Studies Centre which promotes the study and culture of company and corporate law, and is an operational Director of the University Institute of European Studies.

In the course of 2021, the Supreme Court reached a significant milestone in the systematic elaboration and reconstruction of the liability of the Bank for abusive granting of credit.

During the first pandemic wave, the Italian government, intervened to guarantee liquidity to businesses and self-employed workers in the form of loans guaranteed -in various ways- by the state.

Alert Measures in the Time of Coronavirus

Since the issue of the new rules of the Crisis Code (Legislative Decree no. 14/2019), there have been tight criticisms of the institutions for alerting and assisting the composition of the crisis, criticisms that have developed in several directions.